07468 479 108 contact@southcroftycollection.co.uk
⁠⁠⁠ Free UK Delivery available
on orders over £20 ⁠ Certificate of Provenance
and Authenticity ⁠ Read Some of
Our Customer Reviews 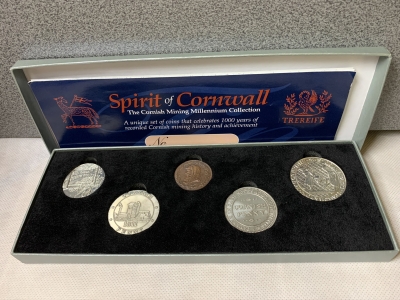 A unique set of coins that celebrates 1000 years of recorded Cornish mining history and achievement. The Cornish Mining Collection is a special limited edition, with only 2000 sets available worldwide.

The pioneering efforts of thousands of Cornish miners, engineers and other innovators associated with every aspect of mining have, over several millennia, placed Cornwall's stamp firmly on this unique industry. The Cornish have made hard rock mining their own and Cornwall has provided in abundance the metals and minerals to satisfy their quest to supply society's needs for these basic raw materials which have fundamentally chnaged the world and the way of life for millions of people.

The set combines Cornwall's two most historically important metals, tin and copper. It includes four coins in Cornish tin from three different sources and one in Cornish copper, all with individual history and authentication. Two different traditional methods of production have been used to create the coins, hand casting and die casting, and as such the South Crofty Collection is continuing with these traditional methods to produced two of the coins in our workshops. The coins in the set represent several hundred years of industry from the Seal of the 1305 Edward 1 Stannary Charter, through the 18th Century copper half pennies and the 19th Century pennies, produced by the most succesful mines, mining families and adventurers. The Collection then brings the story of Cornish Mining in to the 21st Century with a a new design based on South Crofty, the last tin mine in both Cornwall and the UK which ceased operations in March 1998 and which now takes her place alongside Dolcath, long referred to as the Queen of Cornish Mines.

The three central coins in the set are replicas of tokens issued during the period of greatest activity in the Cornish Mining Industry, which began towards the end of the seventeenth century. All are accurate reproductions made using examples of relatively few originals of each which have survived. Tokens of this type were produced mainly in copper and brass.